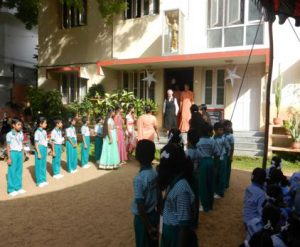 The Congregation of Sisters of St. John the Baptist was started in India at Annanagar, Madurai, Tamil Nadu in the year 1977 by Mother General Claudia Porzio and the General Council. Mother Alberta Stango, then General Councilor and Sr. Enrica Mendozza, then General Economer came to India along with Sr. Lucy Kallarackal and Sr. Alfonsa Thekkumattathil to start this Mission. Late Archbishop of Madurai Most Rev. Justine Diraviam, was kind enough to invite them in the diocese of Madurai and gave them all the support needed. After many trials and difficulties with the help of our Lady of Veilankanni,  Fr. Jesudass, the then procurator of Madurai diocese, managed to get a newly built house. Sr. Teresina Kunnath came to Indian mission to render her service for the formation. Sr. Giovanna Puthenpurakkal also joined later. Sr. Fredrick Mary from USA was in charge of the community for a few months until a superior was appointed canonically. Sr. Gloria Bianchini from Canada also joined the community for formation.

Later on under the leadership of Sr. Lucy Kallarackal sisters were much interested in the pastoral activities of the parish such as teaching, visiting the families, running the Mother and Child Welfare program and conducting the mobile dispensary. Sisters gradually felt that they could reach out to many people though education and thus began a nursery school in the year 1978 with 10 children in the parish campus in a small shed.

During the passage of time nursery school got upgraded into elementary and it bloomed into a High School. The strength of the school has reached over 1250 today and the children are so happy because of Sisters’ faithful and committed work in the school. The sisters apart from teaching, actively involve in the parish ministry such as teaching catechism and visiting the families.

Copyright © 2017 Congregation of the Sisters of St. John the Baptist, Indian Province. All Rights Reserved.
Powered By BoscoSoft